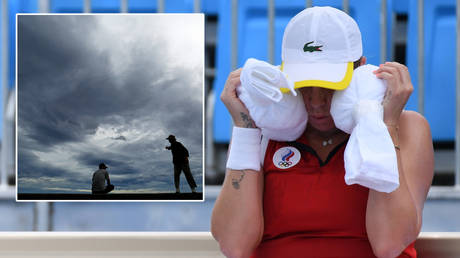 The extreme conditions that have seen stars including Novak Djokovic struggle at the Olympics are set to take another turn when a storm initially forecast as a typhoon hits Japan – leading to accusations of a lack of transparency.

“Japan knew it was lying,” thundered Wetzel, adding that Tokyo moved the Games to October when it last held them, in 1964, in order to avoid the very drama that has been witnessed at times since the start of this edition.

Also on rt.com ‘Leaving it all out there’: Norway triathlete THROWS UP after winning gold in Tokyo before being placed in wheelchair

“Not a single resident of Tokyo would describe mid-summer here as ‘mild’ or ‘ideal.'”

The Olympic marathon event – one of a number of endurance feats, of which some have already seen competitors perform remarkably, given the blazing heat – has also been moved north to Hokkaido in an attempt to avoid temperatures of around 95 degrees. (RT)