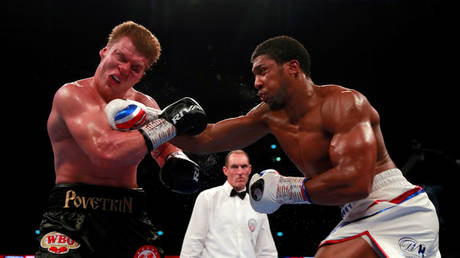 Tszyu, the Russia-born, Australia-based fighter was reckoned to be just about the best in the world at the time, and many believed the fight was a step too far for the stylish Hatton, who was just the latest rising star in the division and had racked up an unbeaten record of 38-0 to set up a date with Tszyu.

Despite being a betting underdog, Hatton fought like a man possessed, steering clear of Tszyu’s hammer-like straight right hand to smother the older man’s work and rip away his signature body shots and then thrash to the head.

Hatton’s blisteringly high work rate allowed him to bully the 35-year-old Tszyu into submission and force ‘The Thunder from Down Under’ to quit on his stool after the 11th round, solemnly shaking his head to his trainer and refusing to come out for the final three minutes. 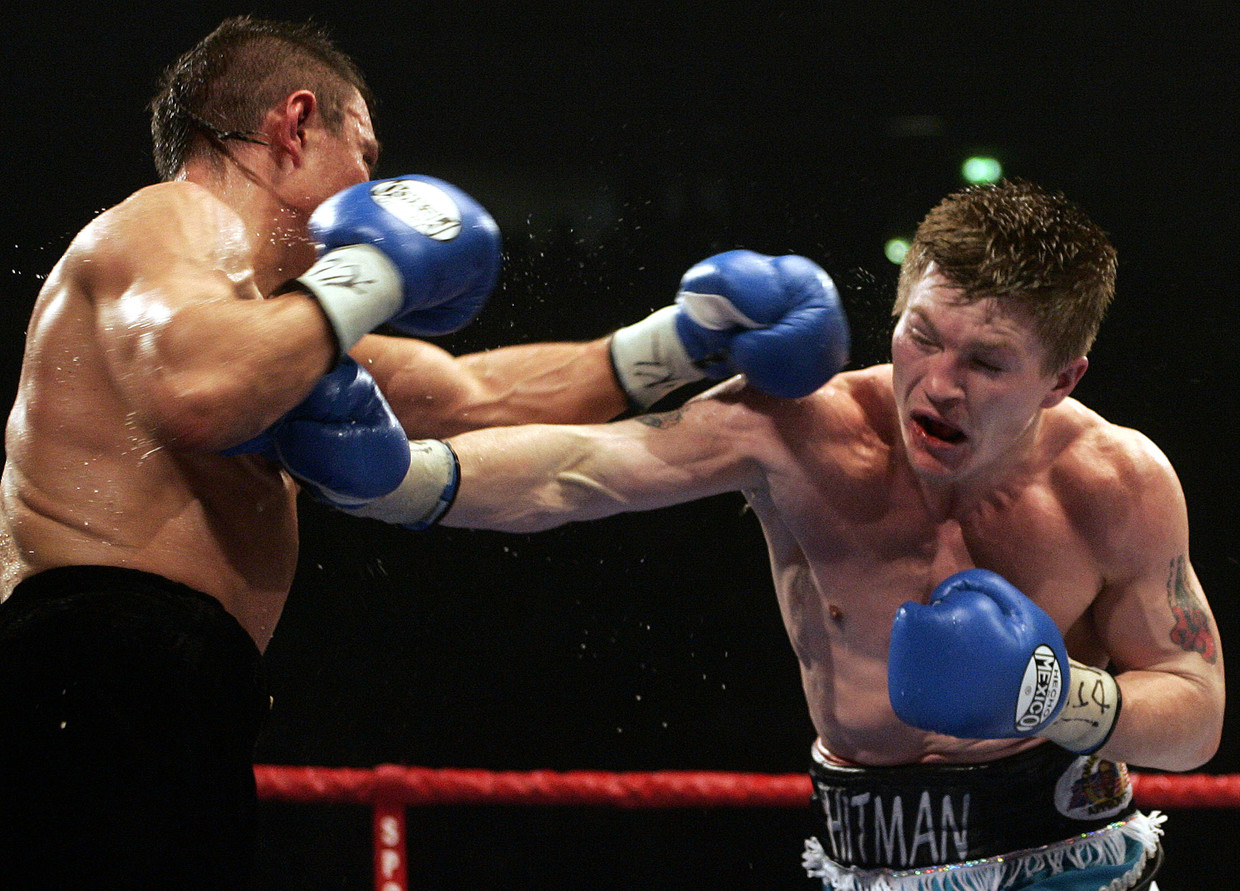 The image of Hatton, collapsing to the floor overcome by emotion, before literally jumping for joy half a dozen times, has now become iconic; the reaction of a young man whose dream of becoming world champion had finally come to fruition in front of his home fans.

Wales’ Nathan Cleverly was one of the darlings of British boxing in 2013 when he went up against the rugged, dangerous Russian Kovalev in his hometown of Cardiff. The cocksure Cleverly soaked up every bit of home advantage and entered the ring wearing a ready snarl, but nothing could have prepared him for what he was about to face.

Little was known of Kovalev at the time, although he had built up a reputation as a fearsome power puncher, racking up nine KO wins from his previous ten fights before taking on the 25-year-old Welsh champion.

Cleverly’s gangly frame was twice sent sprawling to the canvas by Kovalev’s pinpoint timing and accuracy in the third round, and perhaps he would have been stopped but for a dubious intervention from referee Terry O’Connor on the bell. 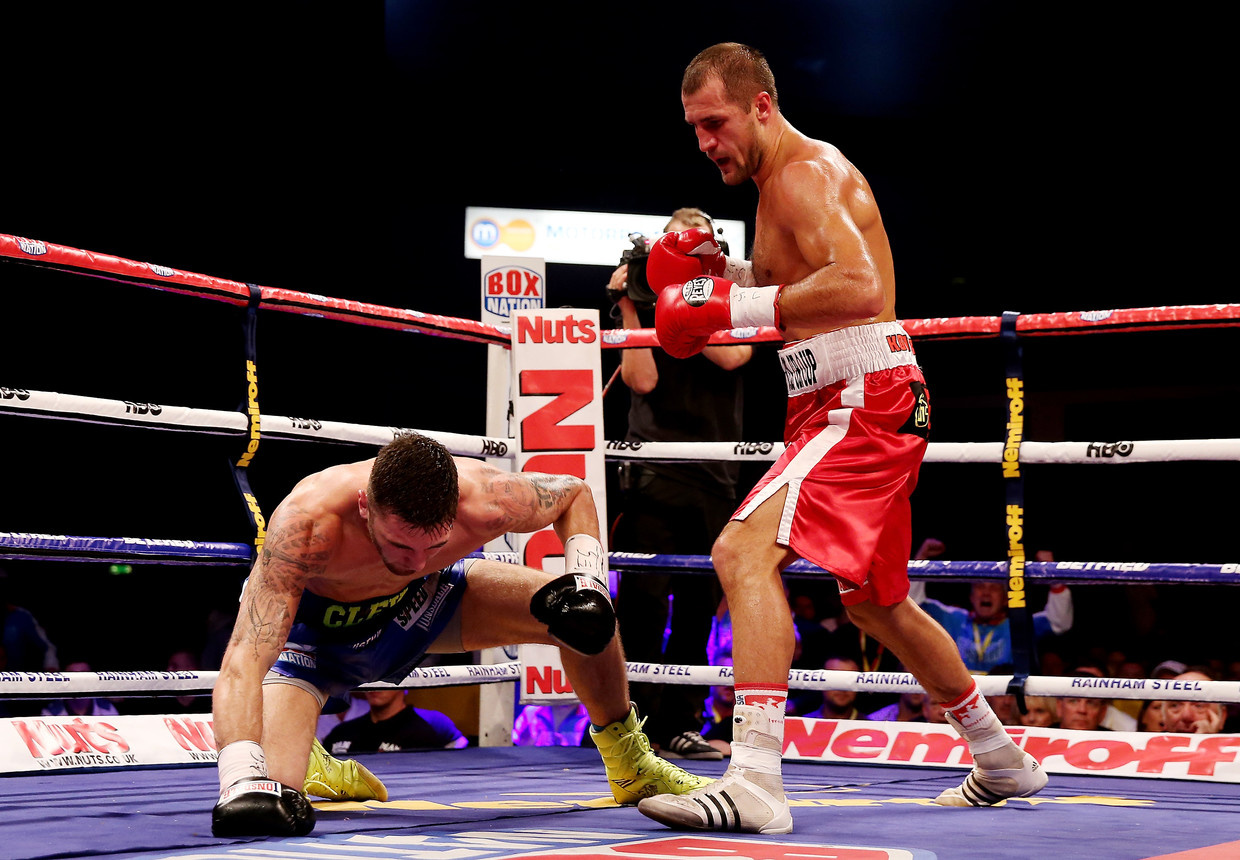 When the action resumed in the fourth, Kovalev continued his onslaught and Cleverly battered to the floor again under a barrage of blows. An almost unresponsive Cleverly could have no complaints when the action was waved off, with every bit of fight having seemingly beaten out of his body.

From there, Kovalev began his first reign as champion, being punctuated by losses to Andre Ward and Eleider Alvarez, and this weekend he will be looking to prolong his third stretch as the WBO light heavyweight champion of the world with a win over Anthony Yarde.

Russian former Olympic champion Alexander Povetkin traveled to London in 2018 to face Anthony Joshua at the famous Wembley Stadium, in the latest test for the IBF, WBO and WBA heavyweight ruler in his own backyard.

Povetkin was attempting to win back the WBA belt he had lost to longtime champ Wladimir Klitschko, who had in the interim become another conquered foe of Joshua in Ring magazine’s ‘Fight of the Year’ for 2017. 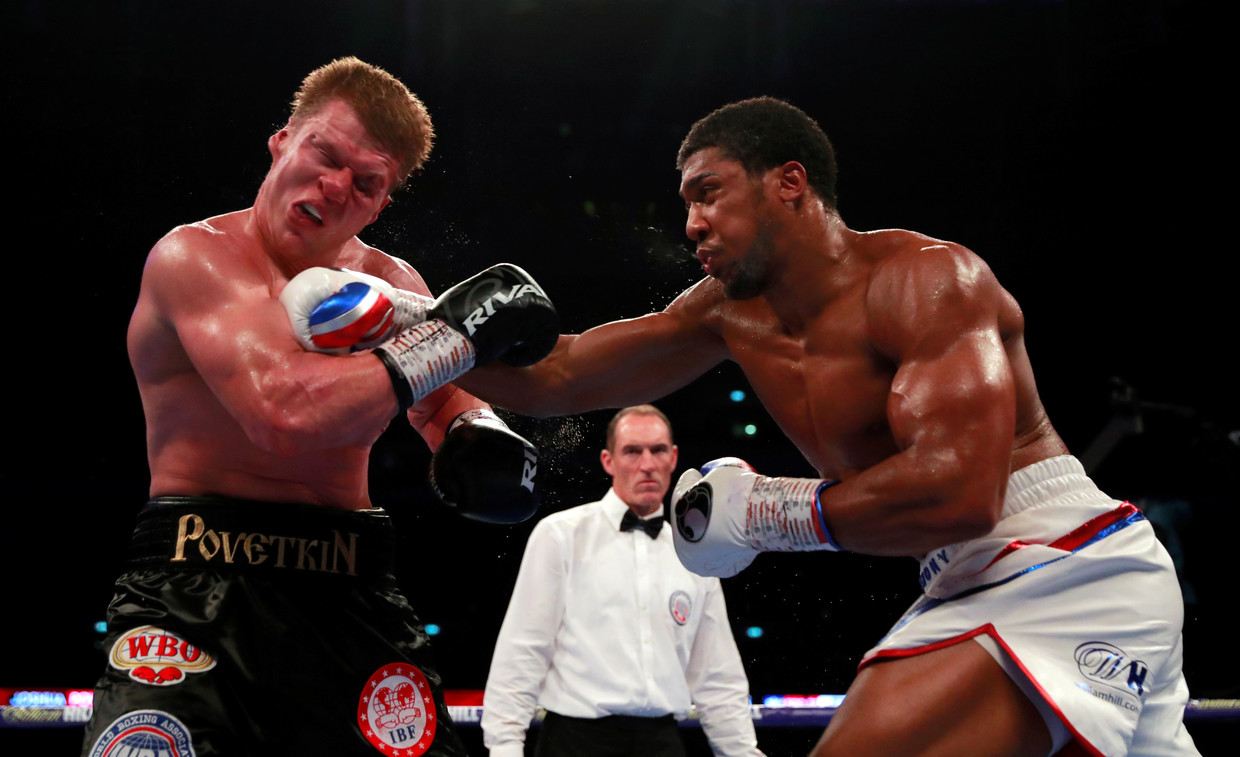 Joshua had KO’d all but one opponent he had faced on his way to becoming one of the sports most bankable stars. Although many believed that Povetkin would provide the sternest test of the champion’s career, the Russian was flattened in the seventh round by a series of Joshua combinations.

After being knocked down for the first time, Povetkin was so disoriented he stooped for a few seconds with his head poked outside the ring before rising and the action being allowed to continue. The fight was waved off when Joshua again attacked with Povetkin about to lose his balance again.

Thank you so much for your energy Wembley 🙌 #AJBXNG

It was the beginning of a string of fights against British opposition on British soil for Povetkin, who went on to KO fringe heavyweight David Price in his next fight and will face Hughie Fury, cousin of ‘lineal’ champion Tyson, on August 31.

Joshua was stunned by late substitute Andy Ruiz Jr in his following bout, which doubled as his American debut in New York’s Madison Square Garden, and will face the Mexican-American in a rematch in December reportedly set to take place in Saudi Arabia.

In a matchup billed quite obviously as ‘David vs Goliath’, British heavyweight David Haye attempted to repeat the feat of boxing great Evander Holyfield by jumping from cruiserweight to capture a portion of the heavyweight title. He did so against ‘The Beast from the East’ Nikolai Valuev in the St. Petersburg native’s fight homeland of Germany. 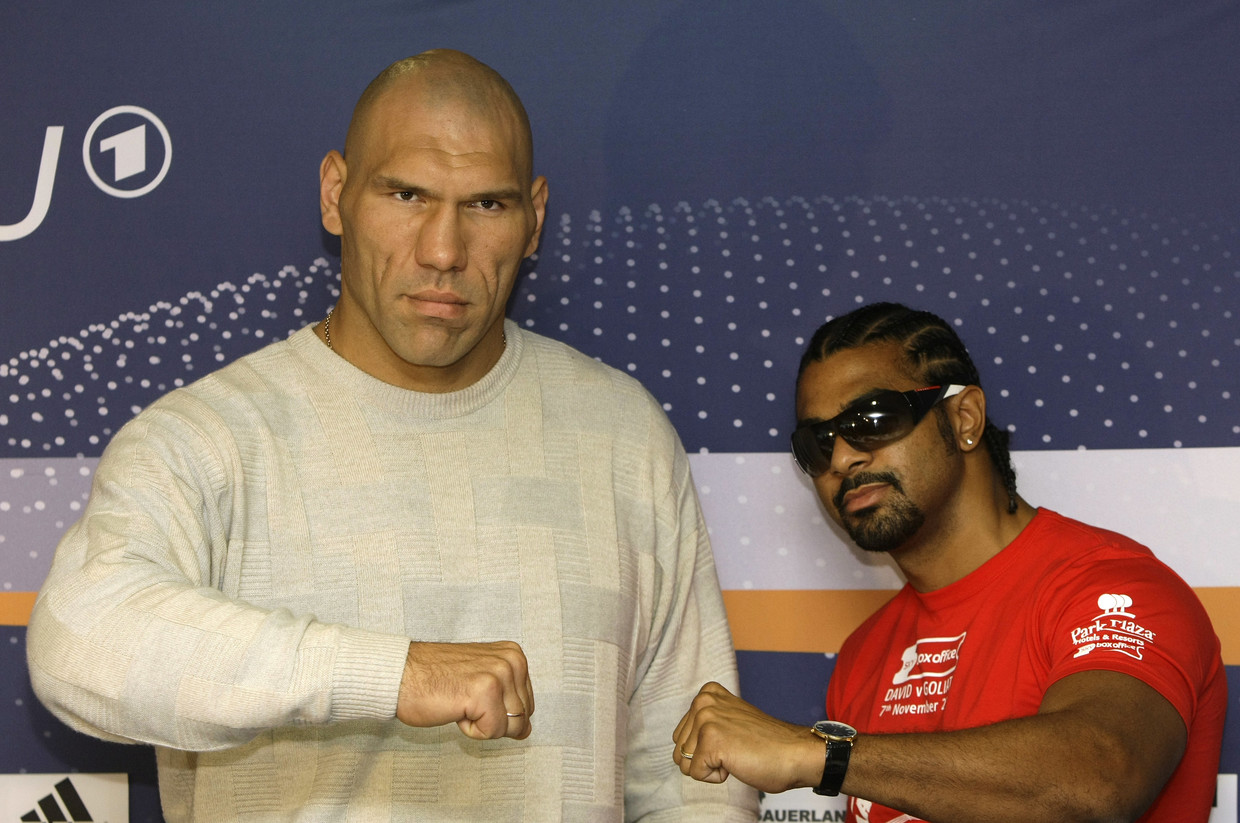 At a towering 7 feet tall and weighing in at 328lbs, Valuev still holds the record as the tallest and heavyweight champion in boxing history and was enjoying his second reign as WBA champion after a very controversial defence against Holyfield himself.

Although physically immense, Valiev had no match for the lighter, slicker Haye’s movement and lost a wide decision, relinquishing his title. Haye almost scored a knockout in the 12th round by hurting the huge Russian with a left hook to the chin that shook him down to his legs. 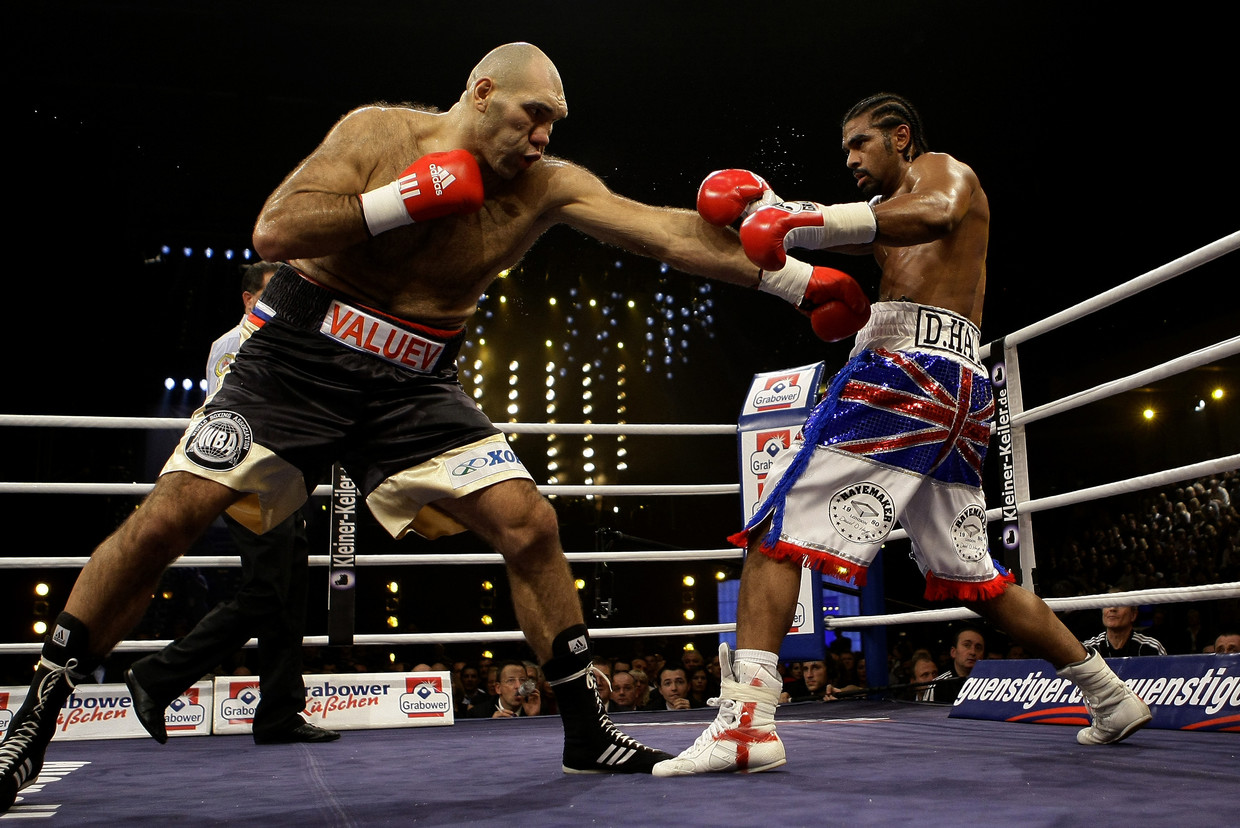 Haye went on to make one defence of the belt before being overpowered and outpointed by a classy Wladimir Klitschko, after which Haye gave his now infamous excuse of a broken toe. Valuev retired after the loss and moved into politics, becoming a member of the Russian State Duma.

Perhaps the most subliminally exhilarating on the list, and certainly the most recent, is the clash between two concussive power punchers in British and Commonwealth 175lbs champion Callum Johnson and Dagestan-born, Canada-based Artur Beterbiev for the IBF light-heavyweight title in Chicago last October.

No one gave Johnson, the little-known Boston fighter who had a stop-start professional career hampered by injuries, a chance against the brute strength of Beterbiev that had ended each of his 12 previous contests early. Despite that, the Brit showed classic grit and bloody-mindedness against the champion.

Although Johnson began the fight well, Beterbiev managed to floor the Englishman in the first round with an awkward-looking right hand late on. Johnson managed to regroup enough to stand and trade with the Russian, sending Beterbiev to the canvas for the first time in his professional career in the second round with a left hook.

When Beterbiev rose he seemed unsteady on his legs, but Johnson could not capitalize and Beterbiev regrouped to land a thudding right to the temple that sent Johnson scrambling to the floor in the fourth round, without a hope of beating the count.