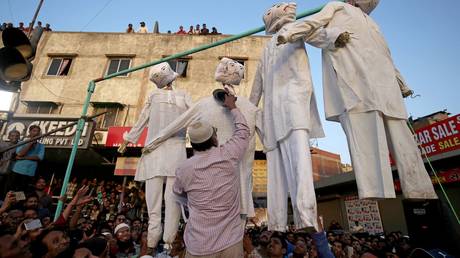 FILE PHOTO: A man beats an effigy of one of the rapists at a protest in India. © Reuters / Amit Dave

The men who gang raped and killed a female student on a bus in New Delhi in 2012 will face punishment eight years later, after exhausting all legal options to delay execution. The grizzly case inspired a Netflix miniseries.

The four males were set to be hanged on January 22, but one of them filed a ‘mercy plea’ earlier this week in a desperate attempt to win more time, the latest in a series of appeals. With the request rejected, however, there seem to be no more obstacles for the verdict to run its course.

Six people were initially charged with the crime, but one of them committed suicide in his cell, while another was released after three years due to being a juvenile. (RT)