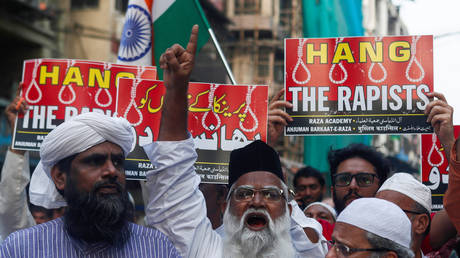 Demonstrators hold placards and shouts slogans during a protest against the alleged rape and murder of a 27-year-old woman on the outskirts of Hyderabad, in Mumbai, India, December 3, 2019. © REUTERS/Francis Mascarenhas

All four of the men accused of a grisly rape and murder of a young Indian veterinarian have been shot dead by police, killed around the same area the young vet’s badly burned remains were discovered.

The men had reportedly been taken to an area near the initial crime scene by police in order to reconstruct the events that led up to 26-year-old Priyanka Reddy’s horrific death when one of the accused grabbed an officer’s service weapon and fired, attempting an escape. All four were killed when police shot back, according to the Shamshabad district police chief. (RT)