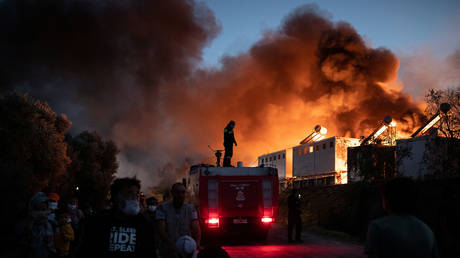 FILE PHOTO: Fire at the Moria migrant camp on the island of Lesbos. © Reuters / Alkis Konstantinidis

A Greek court has sentenced four asylum-seekers from Afghanistan to 10 years behind bars for their role in the fire that ripped through Europe’s largest migrant camp, Moria, on the Mediterranean island of Lesbos last year.

The men were found guilty of arson with risk to human life, the court said in the verdict on Saturday. The defense claimed that their clients had been framed by a witness, saying that the ruling was “an inconceivable conviction without evidence.”

The lawyers earlier filed a request for three of the defendants to be tried by a juvenile court as they were under 18 at the time of fire, but it was turned down by the judge. They already appealed against the sentencing, but it has no suspensive effect and the convicts will be sent to prison right away. (RT)