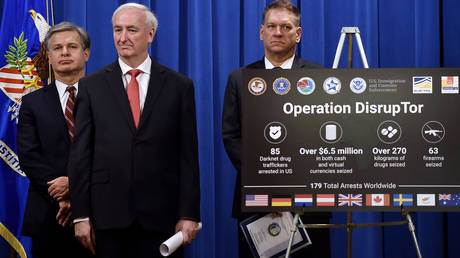 Law enforcement in several countries have arrested 179 people and seized more than $6.5 million in a coordinated operation to tackle opioid trafficking on the darknet, mainly in the US and Europe, American authorities have said.

Dubbed ‘Operation DisrupTor,’ the coordinated action comes more than a year after ‘the Wall Street Market’ – believed to be one of the largest illegal online marketplaces on the darknet – was taken down by authorities in the US and Europe.

A part of the internet hosted within an encrypted network, the darknet is accessible only through specialized anonymity-protecting tools, most notably the Tor browser.

The Joint Criminal Opioid and Darknet Enforcement (JCODE) team of the US Justice Department joined Europol for the operation, which resulted in the seizure of over $6.5 million in cash and virtual currency, and 500kg of drugs in seven countries. In the US, about 275kg of drugs, including fentanyl, heroin, cocaine, ecstasy and other opioids was seized, the Justice Department said on Tuesday. (RT)