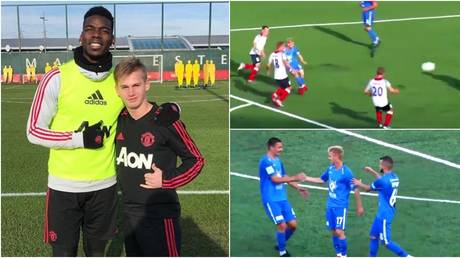 Russian forward Sergey Pinyaev has trained with Manchester United and made history in his homeland with his strike. © Instagram @spinyaev09 / Twitter @FNLeague

Russian teenage sensation Sergey Pinyaev – who is being tracked by Manchester United and has already trained with the English giants – has made history by becoming the youngest ever scorer in his country’s second tier.

Pinyaev, 15, appeared as a second-half substitute for FC Chertanovo Moscow in their Russian FNL clash at Irtysh Omsk, and it wasn’t long before the highly-rated youngster made an impact.

Collecting the ball on the left flank in the 64th minute, Pinyaev danced past one defender before firing the ball into the far corner from just inside the box.

At 15 years, nine months and 10 days old, the forward became the youngest goal scorer in the history of the league.

The finish was Pinyaev’s third goal involvement in three games this season, having already laid on assists in each of his team’s previous two games.

The budding boy wonder had already secured a place in the history books by making his debut at the start of the season at the age of 15 years, eight months and 30 days old – the youngest ever player to feature in league.

Pinyaev’s performances at youth level have already attracted interest from some of the titans of the European game.

Back in 2018, Pinyaev was invited to train with Manchester United at their Carrington training base, reportedly scoring five times in a youth team friendly against Bury.

He returned to train with the club in January of last year, being photographed with United midfield star Paul Pogba and Jesse Lingard.

According to officials at Chertanovo Moscow, the Old Trafford giants have continued to keep tabs on the fleet-footed youngster – who can operate through the center or on the wing – as he plays his first senior season.

Pinyaev’s current club are widely regarded as having one of the best youth team set-ups in Russia, bringing through talents who often move on to bigger teams in the country.

Pinyaev’s goal on Wednesday helped them to a 2-1 win as they stand fifth in the table after three games played.

Pinyaev has already been capped by Russia’s youth teams at under-15 to under-17 level, and boasts an Instagram following of 60,000 as well as a sponsorship deal with Nike. (RT)